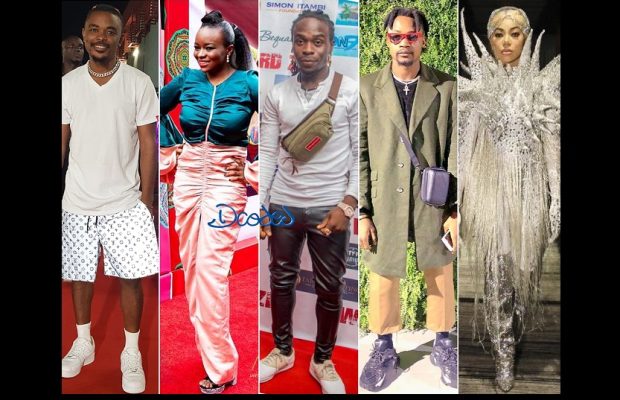 Whenever there’s a red carpet we fashion enthusiasts pay serious attention. We always look for those moments that take our breaths away, because they remind us why we even care about what celebrities wear to events in the first place. But that’s not the case for these holders of our 5 most outrageous red carpet looks in Cameroon.

Red Carpet events in Cameroon have seen an upgrade in fashion since 2015. Celebrities have begun paying close attention to their public appearances, making it easier for fashion bloggers, fashion magazine editors, designers and makeup artists to have something to talk about after events.

There’s been a massive growth in both the fashion and beauty industries with many aspiring designers, stylists, makeup artists and hairstylists making headlines thanks to which celebrity they work with and how much personality they bring to the red carpet.

However, over the past 2-3 years, some celebrities have stepped out in looks that left us scratching our heads, looking on in utter amazement and thinking, “How did they do that? WHY did they do that?” or “What they hell were they thinking?”

There were ill fitted dresses, tiny tops, oversize blazers, wrongly styled ensembles and of course the now ‘infamous collang’ which left many fans slamming either the entertainer, a stylist or a designer on social media.

Here are our 5 most outrageous red carpet looks in Cameroon… and not because they were [ugly] but they have also become the most talked about looks of all time.

This Cameroonian singer and music producer could barely go unnoticed when he showed up at the ‘Saving Mbango’ Douala movie premiere in a simple white t-shirt, Louis Vuitton shorts and some clean white kicks. It wasn’t a totally bad-looking ensemble but he sure didn’t get the memo. The red carpet theme was, “Cameroon Traditional Spectacle” and last we checked, Louis Vuitton and a white Tee do not hail from the East, West, South or Northern part of Kamer. His famous eccentric performances couldn’t stop the backlash which came from his fans to a dead audience who snubbed the singer during a performance in Douala last September.  But we may have found the real reason why Fhish didn’t get his usual applause – his LOOK! The “Anti Kirikou’ singer landed on stage in an oversize knee-length army green colored blazer and a suspended khaki coloured pants and some pretty big shoes… but it seems the audience didn’t feel the look just as they didn’t get his showmanship that night. But he is a great stage performer though. Dencia at the 2018 Billboard Music Awards

Yes, she doesn’t live in Cameroon but can we all agree that this Cameroonian pop singer and businesswoman is the queen of red carpet outrageousness!? She shows up and the red carpet literally stops! Dencia knows what to wear to get all the attention in the room. From her famous jumpsuits to huge hairstyles, the Whitenicious boss takes our breaths away… every time… she rocks a tight, huge shoulder pad, super colorful or blinged up jumpsuit. Well, this is just one of them (picture above). Call it bizarre but we see it as STYLISHLY Outrageous! When she showed up to the 2017 AFRIMMA red carpet in a ill fitted dress by Spellkootor, social media suffered a heart attack! The talk show host/ actress may have thought she could win the Best Dressed trophy for the night when she peeped through herself in the mirror but fans didn’t have the same vision. In fact, she and her designer were dragged for days by fashion lovers who questioned why she chose to wear that rumpled dress. She was also called out for wearing an awful shoes, a multicoloured ponytail and the wrong hairstyle. Damn! We all know this list won’t be complete if Mr Leo and his now infamous ‘Collang’ didn’t make the cut! When a music superstar’s fashion takes over his music headlines, then we’ve got to pay serious attention! Mr Leo is a sweetheart who loves making good music. But his now infamous ‘collang’ aka black leather pants may have taken a toll on his fame. Fans and comedians haven’t stopped referring to that one time the singer showed up at the ‘Ward Zee’ movie premiere in Buea in a very casual white tank top, his black collang, a navy green chest-bag and a slightly oversize white shoes. We bet, none of us will ever forget that look!

Tell us what you think about our List of the 5 Most Outrageous Red Carpet Looks in Cameroon. Leave your comments below. Writing and producing content is my life! I mean...10 years of working experience can do that, right!? Follow me @joanngomba
Related ItemsBlaise BCrystal BihDenciaFashionFhishMost Outrageous Red Carpet MomentsMr Leo
← Previous Story The Saving Mbango Premiere Might Have Been the Best Red Carpet of the Year
Next Story → Saving Mbango movie cast red carpet domination is Unreal