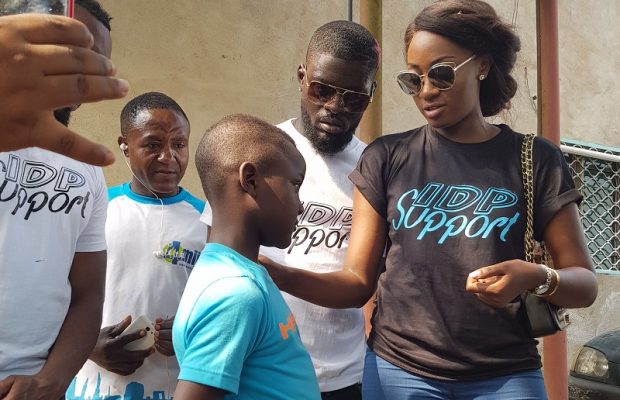 Cameroonian actress and model, Nora Ndem was drawn to tears while visiting some Internally Displaced Persons in Douala, Cameroon on January 6.

Nora Ndem and her group of celebrity friends listened to victims who have sort for refuge in the Littoral Region as they flee from the Regions – South West and North West – battling the deadly Anglophone Crisis.

ALSO READ: Blaise B opens up on Anglophone Crisis “I feel like crying” The ‘Merry Men’ actress did not only try to feel the pain of the victims but she also paid tribute to the thousands of women raped or sexually molested during the crisis.
Ndem thanked the authorities [including the Chief at the Bonaberi area] for allowing her to be able to share the beginning of the year 2019 with her fellow Cameroonians who have either lost love ones and/or properties in the North West and South West Regions as a result of the crisis.

“This means a lot to me. I understand many people have gone through and continue to go through hell because of the unrest in those two regions. I also understand how difficult this must be on their lives and families and how much this crisis has affected their entire being. Its really sad and that’s why I just wanted to help in my own little way to put a smile on their faces even its for one second,” Nora explained to us. Nora also gave a listening ear to  some of the plights of the victims at the camp in Douala. Most of them complained of poor living standards, their inability to protect their children and their education, lack of clean water and electricity as well as food. The displaced persons also raised the issue of them lacking proper sleeping spaces,  lack of mattresses, sheets and clothes to cover themselves. Some of the camps also have no toilets. (sad).
Back in December, Nora announced she will be visiting Cameroon to share the first week of January with the Internally Displaced Persons in Cameroon and that’s only because she was creating a forum for which other Cameroonians could jump on board to help those in need.

Nigerian comedian and actor, AY , Cameroonian actor and producer, Claudio Oben, Chantal Ndie, co-founder of Studio XD and a few others joined the actress to raise awareness and funds. Among the items bought for the victims were food and toiletries.

“We don’t get these types of visits or gestures very often around here so we are eternally grateful to this young lady  and her group of friends for thinking about us and making our New Year celebrations be worth a while. We are suffering and the government is not doing anything to help us. We have lost everything we owned, even our strength to work because we find ourselves in a place where people regard us as beggars and will not give us work or money… I can’t begin to tell you all about how we manage here… We have close to 20 people sharing a single room with just one mattress in it. We have no bedsheets, no buckets, no food… We are suffering and we need help, please we need your help,” explained one of the victims (who wants to stay anonymous)

Nora has promised to come back again and check on their situation.