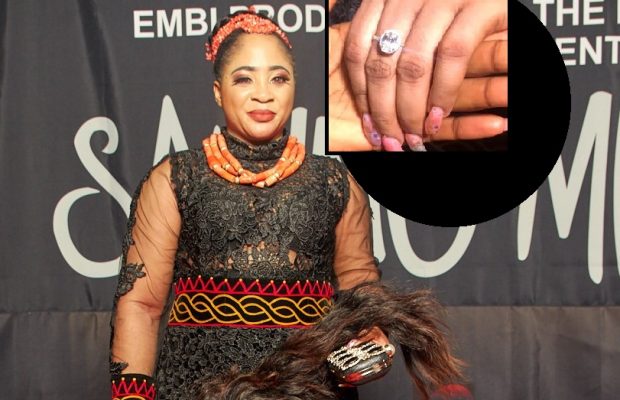 The popular actress confirmed the happy news during an interview with TV host, Joan Ngomba on the red carpet for ‘Saving Mbango’ movie premiere in Douala – October 25.

She said she received the sparkling engagement ring from her mystery boyfriend while preparing for the premiere of  Cameroon’s biggest movie in 2019. “I am so so happy today because my recent movie isn’t just a success to me and the entire cast and crew but this film might have also brought me a special gift…. I am engaged…” the actress said.

The actress didn’t reveal who her fiance is and didn’t say when the wedding will eventually take place but she was pretty excited about becoming a married woman in the near future.

“I feel blessed about my engagement”, she said with a huge smile on her pretty face as she showed off her engaged finger.

“I am wearing Noni White… this is what he made for me and I love it. I feel good and look like royalty,” the actress praised her designer/stylist. Congratulations to the bride-to-be!

Writing and producing content is my life! I mean...10 years of working experience can do that, right!? Follow me @joanngomba
Related ItemsFeaturedSolange Ojong
← Previous Story Fake 44 Pictures photographer jailed in Buea after collecting nudes from models
Next Story → Lynno Lovert breaks silence, reveals mother’s cause of death