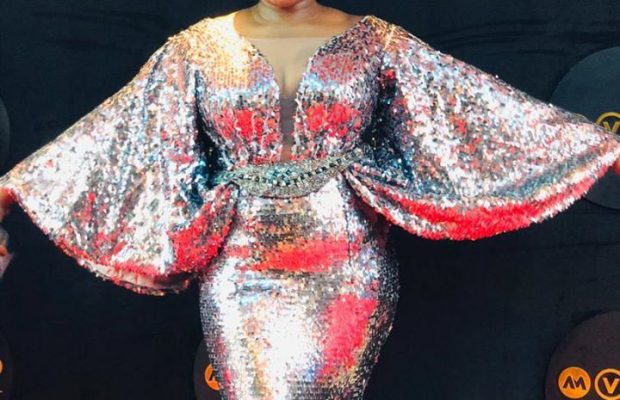 Fashion at the AMVCA 2020 red carpet was mind blowing and the lone Cameroon Film Industry representative, Brenda Elung was a huge piece of that delicious pie, thanks to her TAS Design dress.

Cameroonian film producer and actress, Brenda Shey Elung was a spark of delight at the Africa Magic Viewers Choice Awards (AMVCA) last Saturday when she stepped on the red carpet in a shining silver sequin dress by TAS Designs. She was breathtaking! The seventh edition of the #AMVCA took place at the Eko Hotel & Suits, Lagos Nigeria on March 14 and it was the convergence of Africa’s best in film and television but who said fashion took the backseat?

The stars came to slay and did it in the best designs ever seen this year! Brenda Elung was perhaps the lone Cameroon Film Industry (CFI) representative at the award show but she made sure she was dressed to impress. The movie powerhouse didn’t need too much jewelry as she matched her gown with simple dangling silver earrings and a huge silver ring on her right hand. Her hairstylist, Chika of Chika Lagos pulled her hair back to allow her beautiful neck to not only steal the look but to emphasis on the beauty of the plunging neckline on her dress. Makeup artist, Chika Lagos went for a nude look but played with some colour on her eyelids. She chose emerald green, black and a shimmering pink to help beautify her eyes and a lipgloss to keep her makeup simple, classy and elegant.

Brenda Elung received heavy backlash in 2018 when she showed up to the same award show in a Russian design. Fans went crazy on social media accusing the SAMBA TV series producer of not ‘supporting’ home-based designers on an international platform as huge as the AMVCA. She never responded to any of her critics but she sure did in 2020 when she decided to go with a local designer from Limbe called TAS Design.

Madam Brenda is known for her acting skills, an always composed personality and her consistent contribution to film in Cameroon thanks to projects like SAMBA (which now airs on Africa Magic) and Apple For Two (soon to be aired).