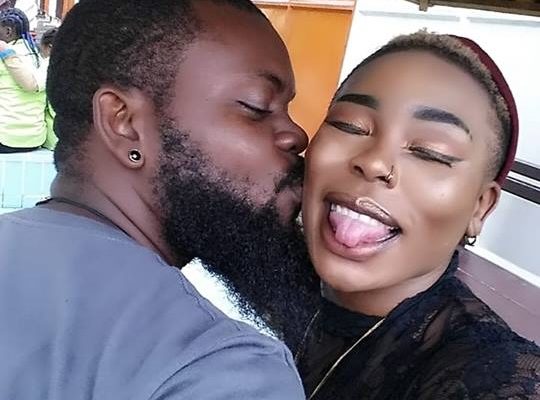 Rapper, Askia got engaged to her man Qilla in March 2019 and now, she’s sharing an emotional post on social media to mark their first anniversary as a couple.

Unlike Cardi B and Offset who had a secret wedding, Cameroonian rapper Askia hasn’t kept her relationship with rapper Qilla a secret at all. On their one year anniversary, July 29, the ‘Let’s Talk’ rapper is sharing her deepest thoughts and feelings for her beau with her fans.

Taking to Facebook, the star uploads a lovely picture of the couple, smiling at each other with an emotional caption.

“If I could be anyone in the world, I would be me… In love with you. Over time things change and things disappear, but your love and your devotion stays embedded, like a stone, in my heart for my eternal days. Happy anniversary baby,” (with blowing kisses emojis). Askia can be seen rocking a full traditional Toghu attire while standing close to her hip hop beau with a huge smile on her face, while her now fiance opted for a camouflage jacket on a grey coloured t-shirt and a black face cap. The male rapper also took to Facebook to celebrate their anniversary, writing:

“Certain words are not said to the public because they don’t know how deep this is. Happy first anniversary. I would wanna still meet you in my next life.” Earlier on June 28, Askia opened up on her relationship with Qilla and revealed their love for one another has been like a journey so far . She said:

“Our relationship is like the journey of life itself. Every glitch and hitch only makes us stronger and more resilient. May our love last forever.”