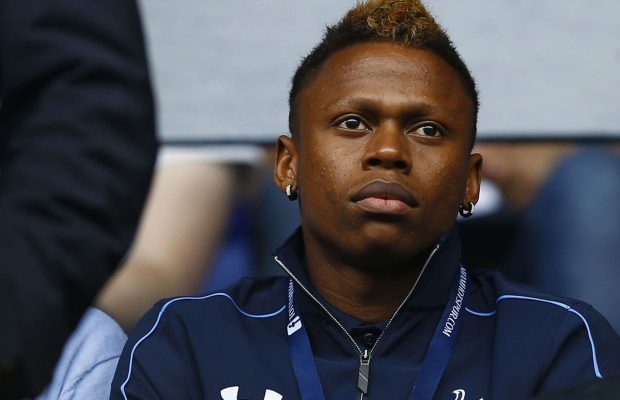 Rumors of soldiers harassing innocent civilians in the South West and North West Regions of Cameroon have been going on for far too long and now, Indomitable Lions star striker Clinton Njie has become the latest victim.

The famous football star was reportedly attacked and punched by a soldier Tuesday night in Buea after he incepted them from dragging an innocent citizen to the police station for no good reason. An insider tells us that Njie was only asking basic questions to the soldier who was ordering his friend to get behind their truck on no charges when the military man landed a punch on his jaw.

Ok, lets start the story from the beginning, according to our source.

It was about 9:00PM – 9:30PM when a truck full of soldiers raided the streets of Buea forcing civilians to leave drinking spots, close their stores and return home.

Clinton Njie and his friends, including former Junior Indomitable Lions captain, Fabrice Fokobo were inside Las Vegas Night club in Molyko at the time. When they were informed about the police raid outside, they decided to leave and go back to their hotels.

Njie had already gotten into the car when he watched a soldier yelling at his friend, Fokobo who was making his way into Clinton’ car.

According to an eyewitness, the soldier asked Clinton’s friend to get behind their truck after harrassing the poor guy. The soldier accused Fabrice Fokobo of being stubborn claiming while other people were moving into Las Vegas, why was he making his way out of the venue instead?

When Fokobo tried to explain to the military officer that he was only trying to go home since he’s not allowed to be out at night in Buea, the soldier told him to get behind their truck.

In the course of explaining to the soldier why he wouldn’t respect his order, because he hasn’t committed a crime, Njie stepped out of his car to ask the soldier what was going on. Instead of the officer to explain the situation, he reportedly began shouting at Njie. Telling him to get into his car and drive off and that the situation doesn’t concern him.

Njie told the soldier he wouldn’t leave his friend behind and insisted that the soldier should, at least, explain to him what his friend was been charged with. The soldier reportedly told Njie to “get the fuck out of here.”

“Do you know who I am? Is this how the military just throw people in jail for no just course?” Clinton asked the soldier. “Who do you think you are and who are you to intervene with my job?” the soldier replied in French before giving Njie a punch to his jaw.

Our eyewitness tells us, Clinton returned the punch and that was when the rest of the military officers ran to the scene threatening Njie and his friends as onlookers watched in total shock.

The embarrassment went on for a few minutes before the Commissioner to the Molyko Police Station showed up. He was the one who recognized Clinton Njie and managed to calm down the situation. But the Indomitable Lions star insisted he wants to report the matter to a higher authority – The Governor!

That’s when the soldiers began begging. But it was too late! Njie claimed the only reason why they were begging is because they now recognize him as a football star. What if he was just an average Cameroonian, would they throw him behind bars for no good reason? He added that he’s been hearing reports of soldiers harassing innocent citizens in Buea but he’s shocked that it’s happening to him in his own home town.

The matter was later taken to the central police station in Buea where Clinton was begged to let go of the situation after several pleas from friends and other top guns in the town.” Clinton Njie is only the latest victim to the repeated police brutality acts in the South West Region. Many celebrities have been calling for a #stoptopolicebrutality since last year especially after hundreds of civilians lost their lives on October 1st from a reported military attack in the English-speaking part of Cameroon.

Question now remains, Why is nothing been done?

SUBSCRIBE TO DCODEDTV CHANNEL for more on Celebrity News.