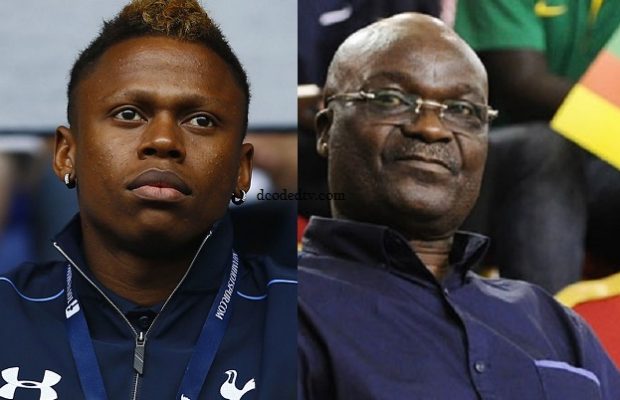 Clinton Njie could be in deep waters with football lovers in Cameroon after refusing to shake hands with football icon, Roger Milla in Gabon on January 18.

In a video that has since gone viral posted by camfoot.com, Njie could be seen walking away from the former Indomitable Lions player while his other colleagues greeted Milla at the entrance of their hotel.

However, some eye witnesses say the current Indomitable Lions star may not have known his colleagues were been greeted by the legend after stepping down from their bus post winning the game against Guinea Bissau, Wednesday night.

From the video, Njie had his headset on and could have been listening to some music so loud and could barely notice the football legend standing by. “All he may have seen were screaming  fans which he smile at them. But i’m not sure he noticed that Milla was there as well,” a close source tells us.

Some other fans have linked his behavior to the current crisis within the Southern Cameroons. “Watch how Clinton Njie snubs La republic delegates after the Lions’ victory yesterday,” wrote Maybelle Boma on her Facebook page.

One fan wrote, “He [Clinton Njie] would have boycotted the tournament [AFCON 2017].It doesn’t make sense playing for another country.I can’t applaud him for snubbing Roger Milla he’s not the course nor solution to our plight.”

Another one wrote, ” That’s a strong massage. A silent weapon.”

Neither Clinton Njie nor Roger Milla has made a statement yet. Stay with us