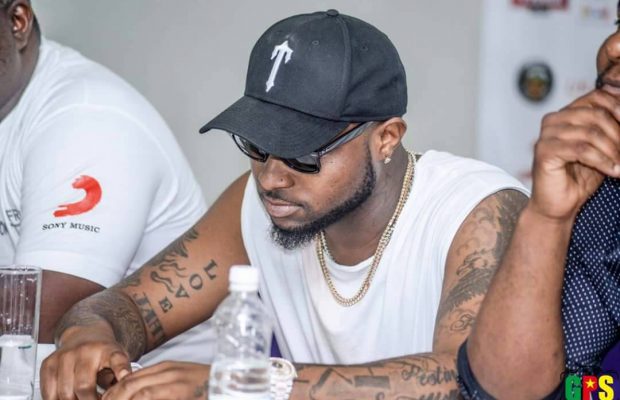 In his second visit to Cameroon on March 17, Nigerian music giant, Davido has a few words of advice to the Cameroonian public and that is, they should learn to encourage, uplift and support their local music stars.

In a short video, which has since gone viral, Davido, who was in the country for his #30BillionAfricaTour concert in Douala, is caught saying he knows only a very few famous Cameroonians which to him, shouldn’t be the case.

“The only people I know in Cameroon are [Samuel] Eto’o and Stanley [Enow] … I don’t know the rest,” Davido is heard saying in the Snapchat video. The singer’s words have long been interpreted into having different meanings . While some fans believed the singer’s true confession was rude and disrespectful to local urban artists who are doing great in putting Cameroon on the map like Jovi, Mr. Leo, Magasco, Daphne, Locko, Salatiel, Tenor and perhaps Makossa legends; others thought it was a strong call for action and to some, Davido’s words carried no weight!

“Him knowing Eto’o and Stanley shouldn’t bother anyone, he clearly didn’t do his research before coming to perform in our country. Which means he doesn’t want to have anything to do with Cameroon music coz if he was interested, he would have been eager to know the kind of music we do, who are our famous artists before getting here instead of limiting himself to the few Cameroonians he has only met outside of Cameroon,” one fan wrote on Facebook.

“Davido has the right to say whatever he wants to say. He clearly laughs while saying that he knows only Stanley and Eto’o. which means its a sad situation that we do not push our own artists on the international platforms neither are we consuming our own music good enough to make our foreign friends love them too. So he’s right, we have work to do, so we should stop complaining and ranting like children,” another fan reacts. However, that’s not all Davido said in the video. The “FIA” singer added that it’s not fair for him to know only two Cameroonians in the entertainment business. To him, entertainers need the support from their home based fans to help push their popularity worldwide.

“You all need to change that… Put Cameroon on the map!” Davido went on to say in the video.  “Every artists in Cameroon should be world wide because  your music is beautiful. So you guys support your own music. It’s very important. Start at home first,” the singer added.

Now, many would think it’s a shade on our local musicians but is he sending out a powerful message to our artists to do more when it comes to their public relations, music streaming strategy, performance strength, music sales, international presence  and also to our media to do more in exposing our talented entertainers in a positive light to the world?

Dcoders watch the video below and please share your thoughts below.

@davidoofficial sends out a strong message to all Cameroonians that they should learn to support their home based musicians, “coz every artists in Cameroon should be world wide because your music is beautiful” Thats why the naija guy says, “the only people i know in Cameroon are Samuel Eto’o and Stanley Enow ” _____________ #dcodedtv #team237 #DavidoinCameroon #30billionafricatour #cameroon #davido #sonymusiciv #IconProdAfrica