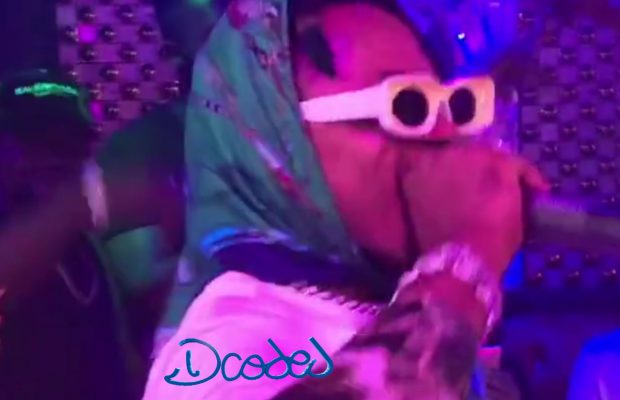 Cameroonian singer, Fhish was spotted in a grandma floral headscarf while performing at a nightclub in Douala.

Fhish is taking his eccentric style one step further by exploring a different look but rocking a female headscarf in public is definitely something to draw so much attention from fashion bloggers. The ‘Anti Kirikou‘ singer was seen hiding his colourful dreads with a green (or blue-ish) floral headscarf while wilding out among fans at the Paradis VIP night club at Akwa-Douala. But that’s not even all. He covered his eyes with his huge white sunglasses (same one he wore in his Koro Koro music video) and donned a red jean pinafore above a big white t-shirt too!

Fhish is known for his zestful stage performances and edgy fashion sense. So, it may not come as a surprise to spot him wearing a ladylike headscarf  while on duty.  After all, he isn’t the only male entertainer rocking female looks in the industry. There are Lil Uzi and ASAP Rocky! His stylist and friend, Pafe Styling once explained to us that Fhish loves to explore with his style and he isn’t one of those artists who will shy away from trying new things, no matter how strange they are to others. In fact, he told us “the more different you look, the more attention you get”.

So, does this mean… Fhish’s head scarf look is for attention or he’s just being the highly spirited singer we all know him to be?

Dcoders, drop your thoughts in our comment section below.

Writing and producing content is my life! I mean...10 years of working experience can do that, right!? Follow me @joanngomba
Related Items#237fashionFhish
← Previous Story Saving Mbango movie cast red carpet domination is Unreal