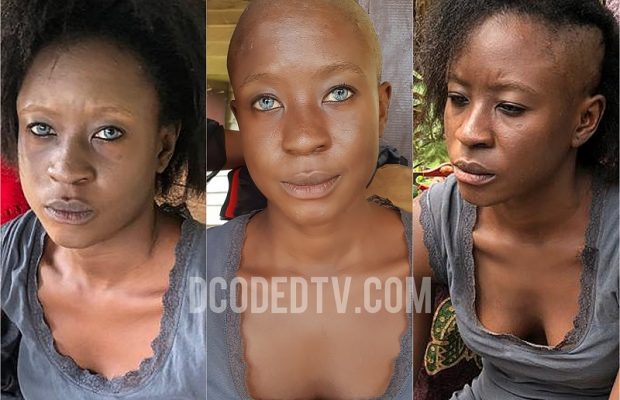 The things actors do for the job… or should we say to win an Ecrans Noirs!

Actress, Laura Onyama may have her eyes on another big award this year or next and to get it, she would do anything to make her new character in her new film, ‘Saving Mbango’ even more convincing… like, going bald!

Onyama looks unrecognizable for her new role as a woman battling cancer and community rejection while struggling to stay unshaken because of her love for a village boy (played by Gordis Fungwa).

The usually gorgeous actress is ditching her usually elegant appearance for this sick look in order to raise awareness on the dangers of breast/blood/brain cancer among women. Onyama tells us exclusively that taking this role was pretty challenging, especially after reading the script, but it was very important she did.

“This is one of the most challenging movie roles I have ever taken upon myself. No one told me there will come a time when I will shave my gorgeous hair to play someone who isn’t too real. But, hey! it comes with the job and this is the career I’ve chosen… I’m glad I’d to do this,” Laura tells us.

“Many women go through this … they have to accept their health condition and shave their hair to start chemotherapy. It’s never an easy thing to do and my character is telling them, its okay… Cancer is real! Anybody could fall victim to this deadly disease.  After all, you are still beautiful with or without hair on your head. What’s inside the head is more valuable,” she adds. The Cameroonian actress plays Mbango in the movie, a very sick lady who is considered strange and shamed by her community because of her health and family story. However, she faces her cancer diagnosis with optimism and courage thanks to falling in love with a struggling village boy.

The film is Stephanie Tum‘s first attempt on film production and Lynno Lovert‘s first screenplay to be adopted into motion picture.