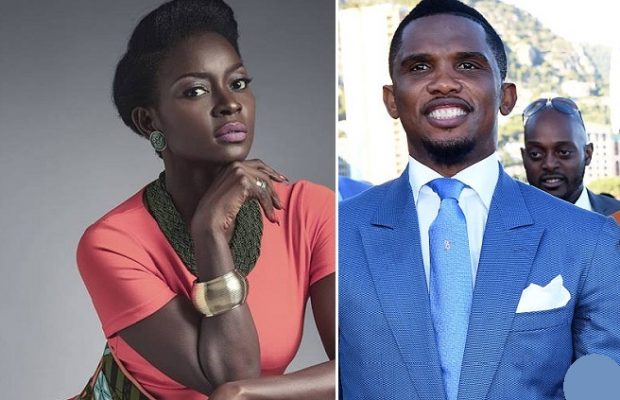 Famous Cameroonian actress, Lucie Memba bumped into former Indomitable Lions hero, Samuel Eto’o during her stay in Douala and she couldn’t help but be excited over what they talked about. We totally get the feeling! The actress, who has stared in blockbuster films like “Defying the 6th” as well as an upcoming film she landed to star alongside Nollywood veteran, Zack Orji, says she was completely thrilled to have finally met the African football icon even though it was in an unexpected manner.

“I met Samuel Eto’o and he said he likes my work,” the actress excitedly revealed to us.

“He encouraged me to continue working hard and also congratulated me for my contribution to putting our movie industry on the map,” she added.

It’s Lucie‘s very first time of meeting the football superstar and tells us their discussion went smoothly, maturely and was so much fun but the sad part was she couldn’t get someone to take her good quality pictures with Eto’o. Ouch!

“I was very happy but I got really poor quality pictures from that meeting,” she explains while lamenting over the poorly taken photos of her big moment. However,  the sexy mother of three says poor quality pictures or not, she’s extremely happy to have met the Cameroonian soccer legend and won’t mind sharing the pics with the world because, “I may never get another chance to discuss with this legend.”

We totally get your drift Lucie, who wouldn’t? Dcoders, who would you react when you finally meet Samuel Eto’o?

Writing and producing content is my life! I mean...10 years of working experience can do that, right!? Follow me @joanngomba
Related ItemsFeaturedLucie MembaSamuel Eto'o
← Previous Story  “My video with Davido will be the biggest in Cameroon,” – Stanley Enow
Next Story → Locko begs for dialogue to end the Anglophone Struggle