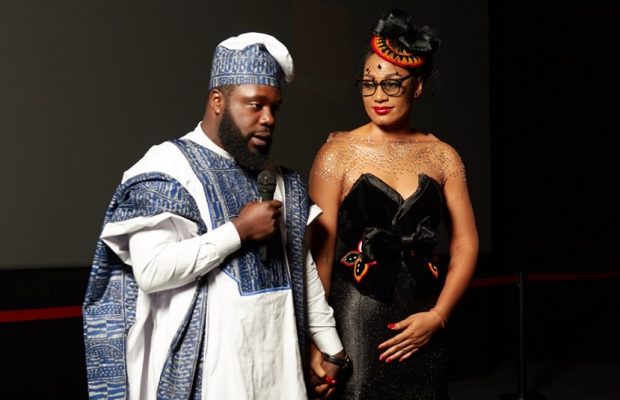 Cameroonian actor Lynno Lovert is opening up about his mother’s cause of death for the very first since losing her in January 2019.

It is taking Lynno Lovert close to ten months to publicly express his feelings over the death of his mom. The popular actor says losing his mother is one the most difficult life experiences he’s ever had to face. Lovert came clean in front of hundreds of movie lovers at the Canal Olympia cinema in Douala, October 26 when revealing what inspired him to write, one of Cameroon’s most talked about movies in 2019, ‘Saving Mbango;’ a movie which tells a touching story of a young village boy [John] who falls madly in love with a cancer patient [Mbango] and how he fights to keep that love, amidst community rejection and a disunited family.

“The truth is that the death of my mother inspired me to write this movie. I wrote this film when I was in a very dark place in my life… I was going through a very painful experience. My mother passed away from cancer and there was nothing me nor anyone could do. She was a very strong woman in her community but I watched how a giant crumbled at the feet of this deadly disease and it was unbearable to watch her slowly go. Her death made me realize so many things… Cancer is real and dangerous and those in rural areas also go through it without even knowing it’s cancer.

“Instead, many of them would attribute it to witchcraft and others would stigmatize these victims with the belief that they have been possessed by evil spirits or are contagious in the communities…” Lynno poured his heart out as his movie premiered in Douala, Saturday night. Lynno first came into the limelight at age 17 when he featured in ‘Before The Sun Rise’, an Agbor Gilbert film which also starred Nollywood giants; Olu Jacobs, Zack Orji and Dakore Egbuson. Since then, he’s been in and off the movie scene by choice.

‘Saving Mbango’ is the actor making his debut into screenplay and luckily for him, the film was picked up by first time movie producer, Stephanie Tum and has now been tagged one of the most talked about, promoted and well produced movies in Cameroon. The film is directed by award winner, Nkanya Nkwai.

“Writing Saving Mbango is truly life changing for me. I can say I am now a different person thanks to this film. Sometimes I cannot even believe I wrote that. This film has taught me to believe more in myself and my talent. I want this film to raise conversations and awareness within out communities and our government… that they should take necessary precautions in extending help to cancer victims in our villages too and our people should seek help for victims instead of concluding that it is African witchcraft. This is because these villagers actually die from cancer and it has nothing to do with superstitious beliefs,” Lynno tells us exclusively.

Lynno Lovert‘s mother passed away from brain cancer in January 2019. He describes her as “a very strong and beautiful woman.” May she continue to rest in peace.