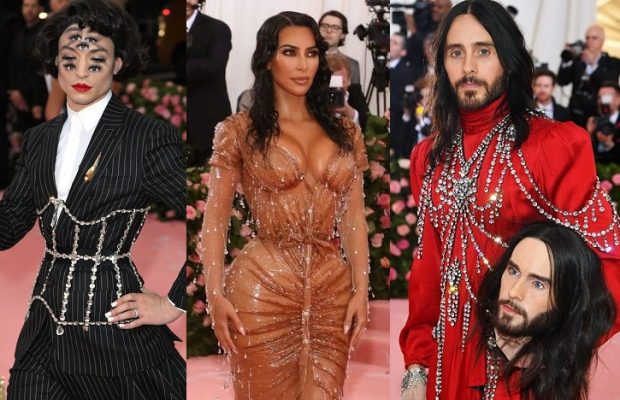 Talk about doing the most on fashion’s biggest night! Kim Kardashian, Bella Hadid and Ezra Miller came to the Met Gala 2019 red carpet on May 6 literally dripping in blings!

Gone are those days when jewelries were meant for the ears, hands or necklines. These days, we can put them on clothes and make it the new cool. But should this be the new trend?

This year’s Met Gala theme was ‘Camp: Notes on Fashion’ which means go extra and over the top with fashion and the stars came in major!

Here are five celebrities who made jewelries become past of their outfits.

1. For the Met Gala 2019 fashion night, reality star Kim Kardashian literally came out of the ocean in a nude, body-hugging Mugler dress that made her waist nearly invisible, dripping in beads and sequins. She was in the arms of her husband, Kanye West. Although she kind of reminded us of Beyonce’s look at the 2017 Met Gala, the mother of four looked totally snatched! Kim Kardashian in Mugler dress dripping in beads and sequins

2. Besides his multiple eyes on his head, actor Ezra Miller appeared with a giant glittering waist trainer on his over-the-top Burberry suit (Who does that?) Recently, the ‘Fantastic Beasts’ star has been pushing the boundaries of gender fluidity and his looks have been so refreshing, so great and so beautiful. 3. Actor, Jared Leto came with his own face in his hands but was all wrapped up in jewelries worth millions of dollars! The former rock star was in a Gucci red gown blinged to the teeth in silver diamonds. 4. Famous Victoria Secret’s model, Bella Hadid couldn’t have looked any more camped than in her black and shiny Moschino dress at the 2019 Met Gala. Styled by Mimi Cuttrell, the supermodel rocked a dress with major cut-outs and dripping in over ninety carats of Lorraine Schwartz jewellery. She slayyyyed!