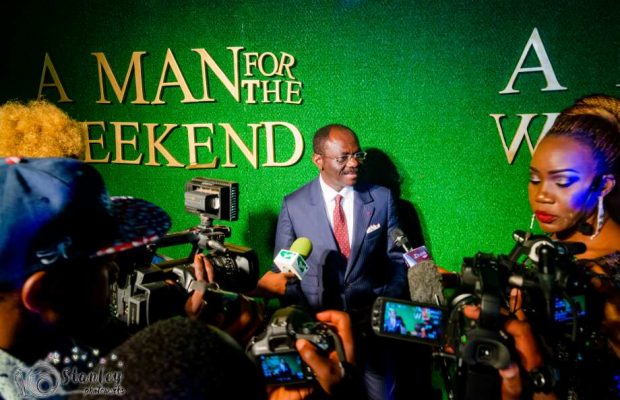 The Minister of Arts and Culture, Prof. Jean Narcisse Mouelle Kombi was the guest of honor at the premiere of Syndy Emade‘s latest film, “A Man For The Weekend” in Douala on October 28 … making it the first ever movie premiere attended by the Minister. Min. of Arts and Culture, Prof. Narcisse Kombi at “A Man For The Weekend” Douala premiere

Prof. Kombi, in a favorite navy blue suit, white shirt and red tie, lit up the Douala event as he smiled and shook hands with the cast and crew of the “A Man For The Weekend” movie at his arrival.

The outing comes only few months after the Minister graced the Cameroon International Film Festival (CAMIFF) in Buea back in April 2017 for his very first time. Alexx Ekubo, Prof. Narcisse Kombi and Syndy Emade at “A Man for the Weekend” Douala premiere

Saturday night’s grand film premiere saw the minister mingling with actors Syndy Emade, Nchifor Valery, Solange Ojong, Miss Lee and Nollywood superstar Alexx Ekubo who played major characters in the film to highlight the essence of love, understanding and communication between parents and their children, an employer and the employees as well as the society and young single women.

Asked about the movie “A Man For The Weekend,” Prof. Nacisse Kombi told reporters,

“It is a great gesture to see a young woman [Syndy Emade] do such an event which brings together people from different backgrounds and culture on one common ground. I think she did a good job and the Ministry of Arts and Culture is here to support such initiatives and help in encouraging the making of more good films in Cameroon to help teach our society about the importance of relationships, family and love.”

About inviting the Minister to her movie premier, Syndy tells us, “He is our Minister and we are glad he agreed to come and watch what we have worked so hard to create. We need him to know we can make things happen and we need his support as we sail through this movie journey.”

Writing and producing content is my life! I mean...10 years of working experience can do that, right!? Follow me @joanngomba
Related ItemsCameroon International Film FestivalFeaturedJean Narcisse Mouelle KombiSyndy Emade
← Previous Story 5 things to know about ‘Hope For Vulnerable and Orphans’ Organization
Next Story → Alexx Ekubo reveals his admiration towards co-star Syndy Emade