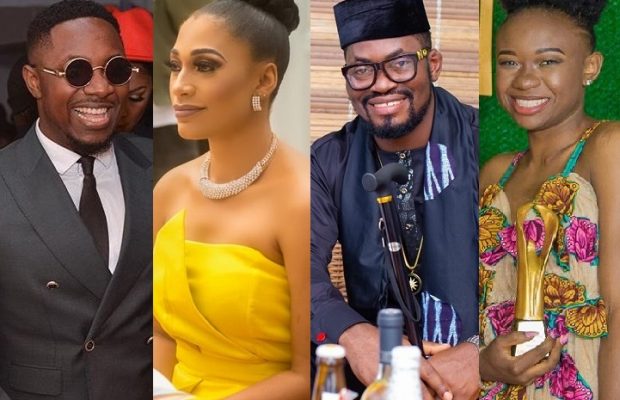 Goodbye 2019 and say hello to 2020! It’s a New Year and it is well known that New Years come with New Resolutions. Today, we will be serving a few but well needed resolutions by Cameroonian entertainers and the Industry at large.

In 2019, entertainers pushed the envelope, created content and lived a far more stable life in contrast to previous years. No one raised the roof of World recognition as far high as Salatiel, whose collaboration with Beyoncé and Pharrell Williams on ‘Water’ from The Lion King:The Gift album made global headlines. Tzy Panchak gave hope to young artists through his famous online music challenge campaigns which led to singers like Vivid, Cleo Grae, Vernyuy Tina and even Gasha owning their thrones.

Rapper, Askia also had the popular ‘Bag Series’ which ended in, a first of its kind, all-female music concert in Douala. Comedians like Senior Pastor and Oboy Da Comic put so much laughter on the faces of hundreds of people with their tremendous comedy shows while others like Badly Broughtup and Rapalo4 brighten up our daily lives online with their very popular comedy skits. The Cameroon Makeup Artists community grew bigger and closer last year and have been empowering one another. Then came the movie, ‘Saving Mbango‘ which revolutionised the movie business in the country.

In a nutshell, Cameroonian entertainers made some very good improvements, but in that same light made just as many mistakes; brought about by their ignorance and the ‘Know It All’ mindset. But hey! there’s always room for change and here are 5 things we think are desperately needed this new year.

Jovi le Monstre takes the shine in this department with his frequent Twitter rants and constant bashing of young and established artists. This habit is completely irrelevant to the industry especially if the rants are not constructive but meant to bring down others’ self esteem and art. Mind you, rants are entertaining and content worthy but what’s their essence, if they are not to build the industry or even create massive online presence for our local art?

This has become a habit for entertainers to repeatedly show up late to red carpets, events and media interviews. Maybe to them, lateness comes off as a grand entrance or serves to differentiate them from the masses. But what they truly fail to understand is the fact that, ‘Time is money’ and lateness only destroys one’s reputation as a serious show businessman/woman. The earlier you show up, the earlier you leave and most importantly, you get enough time to settle in and understand your audience, this places you in a good position to market yourself better.

Entertainers need to build brands which are not only reputable but also valuable and marketable. Most of our stars are more interested in being famous and forget they eventually need to monetize that same fame. How do you make your music, films, designs, comedy, blogs, etc. ready for the market? How do you make your art valuable to consumers? Entertainers should learn how to strategize everything including their lifestyle, to always bring reward to themselves. They shouldn’t think it as undervaluing to employ marketers/sales agents to bring them visibility and money. Social media is a huge platform to earn money. Media interviews are another platform. Always be ready to sell yourself (brand) at every given opportunity. Attending networking events is also another medium. Instead of locking up yourself at home, show up at events which could get you valuable contacts or enrich your brand.

Most of our entertainers lack the lifestyle which fans could emulate or even dream of having. In fact, they don’t care to own or create one. Most of them spend time behind their phones and fail to live a life seen and desired by their own fans. In 2020, they need to make fans love them for them. Be accessible, available and create forums whereby your fans could communicate with you personally. What you wear, what you eat, who you date or mingle with as friends, where you hangout, and what you believe in are some of the things which relates your fans to you and vice versa. Stop hiding everything about your life (except your art), from your own fans! You owe it to them to be available and transparent, to an extent. Use everything you have to relate to one fan who believes and loves you. This would not only draw your fans closer but also increase the size of your fan base and hence more consumption of your art.

This shouldn’t be any News but entertainers need to take themselves and their brands very seriously. They need to understand that being an entertainer is a full time job which requires money, time and the mind invested into it. After all, becoming one was solely your decision, so fulfilling the job description shouldn’t be an issue, right? Calling yourself a musician and dropping two songs in 12 months should stop in 2019! Actual musicians are constantly in the studios, creating so much music, they’d have enough to drop a song every month, if need be. Film makers should stop blaming everyone, but themselves, for their very slow growth. Instead, support one another and create forums (more workshops and guilds) to discuss strategies for a better Industry. Whatever happened to the Cameroon Fashion Designers Street Sales program? Why are there no Cameroonian TV/Producers/Presenters associations to help train and empower media personnel?

WE can’t just sit and continuously point fingers at the Government (even though they are a big deal) for our failures or inability to make little strides. Together, we can bring change to the entertainment sector, no matter how small that change may be. WE need to tell ourselves the  truth and be honest about where we really want our Industry to be in the next, say, 10 years and what legacy each and every entertainer or showbiz contributor wants to leave behind.

WE are not above making mistakes but there’s absolutely nothing stopping anyone from learning from them… and fast. Let’s make 2020 greater and better for ourselves, as individuals and as a generation.

Writing and producing content is my life! I mean...10 years of working experience can do that, right!? Follow me @joanngomba
Related ItemsCameroon EntertainmentCameroon Music IndustryFeaturedShowbiz
← Previous Story Tzy Panchak: 5 Most Outstanding Music Projects by Cameroonian singer
Next Story → Valentine’s Day Playlist: 10 Cameroonian R&B songs to play for your partner