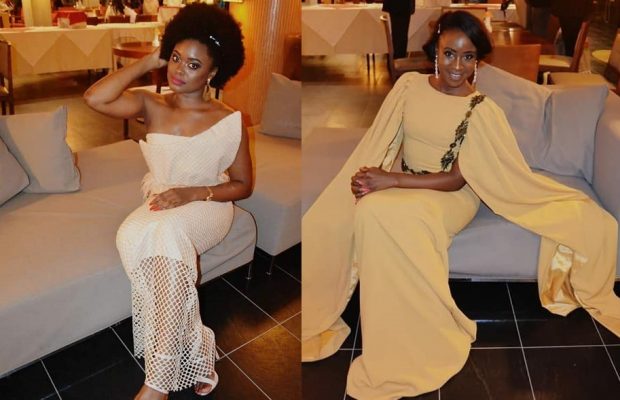 Cameroonian actresses, Nsang Dilong and Laura Onyama came to slay at the Al Hociema Film Festival which took place in Casablanca, Morocco over the weekend.

Both dark skin beauties were the center of attraction at the film festival when they arrived looking like snacks! As usual, the actresses went with local designers for the slay! Nsang Dilong chose her long time friend and designer, EB Kreations for her big night in Morocco. The actress looked ravishing in a showstopping off-the-shoulder cream white dress, wrapped  up in a nude fishnet and soft feathers at the waist.

The actress also went for her signature afro hair do and kept her makeup subtle and she complimented her looks with with dangling golden earrings and nude sandals. She looked amazingly beautiful as smiled for the cams.

Fellow actress, Laura Onyama looked every inch the screen star on Sunday night, as she attended the Al Hociema Film Festival in a subtle brown gown by her dear friend and favourite designer, Mareta West. The Buea-based actress exuded elegance as she pulled her hair into a forties-style wave. But most interestingly, her gown took all the attention in the room. The dress didn’t only features a long cape at the back but also had a glittering design at the side, taking her elegance to a whole new level.

Both Laura and Nsang were among the five Cameroonian film makers selected by the CEO of Ecrans Noir, Bassek Ba Khobio to represent Cameroon at the film festival in the Northern African state. “The question is why do you show up to support a festival that the current government has clearly showed is the only recognised festival in Cameroon because it is a Francophone festival.
The only Anglophone festival in Cameroon has continually been underlined by this same government.
When Anglophone film makers come to this comment section and ask “WHY??” I mean who are you kidding??? Please don’t act like Francophones who are claiming don’t know what is happening in the Anglophone zone but it’s as clear as the hand writing on the wall. Let’s not always try to be politically correct and call a spade a spade.”