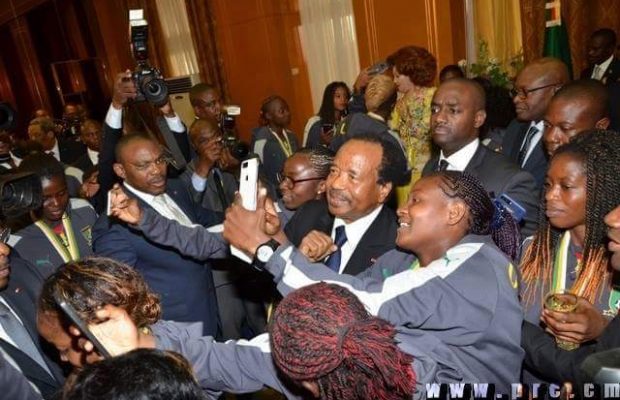 President Paul Biya is under fire for supposedly giving a blind eye and deaf ear to the current crisis in Bamenda, North West Region, despite the killing of unarmed citizens by the military forces.

The Cameroonian Chief of Army,  who is yet to address the social unrest in that part of the country,  was pictured partying and taking selfies with the Indomitable Lionesses at the Unity Palace, Yaounde on December 8 while nearly 8 youths lost their lives on the streets of Bamenda after been shot by soldiers.

If you’re still lost,  let’s break it down for you.  The population of Bamenda have been taking to the streets to protest against the discrimination on the “Anglophones”  by the current “francophone” government.  They have been calling “for change”  in not only the judiciary system but generally begging for President Biya to address and solve the “Anglophone Problem“.

Instead of getting the president’s ear,  they were greeted by armed forces who cared less about their peaceful protest and instead fired their arms at the least opportunity they get.  According to reports,  8 are dead so far.

Meanwhile some Cameroonian celebrities have condemned the silence of the president,  calling his act “irresponsible”  and not befitting for a ‘father’  who cares about his people.

Writing and producing content is my life! I mean...10 years of working experience can do that, right!? Follow me @joanngomba
Related ItemsAnglophone ProblemBamendaFeaturedIndomitable LionessesPaul Biya
← Previous Story Frank Sire is a sick psychopath and rapist in new movie
Next Story → Mr. Leo bags 3 at Balafon Music Awards 2016 [Full List of Winners]