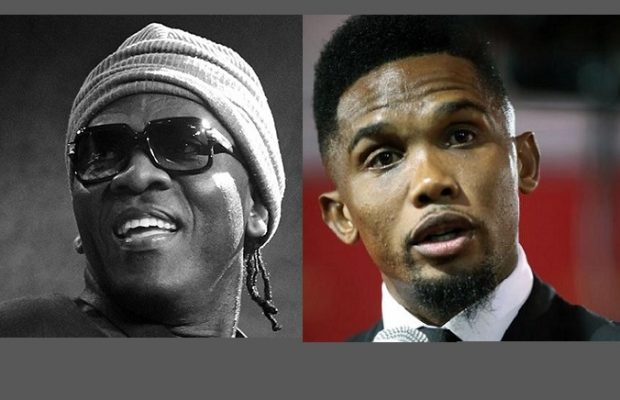 Cameroonian music icon, Richard Bona is calling it as it is!

Bona is putting football legend, Samuel Eto’o on full blast for sealing his lips and keeping a blind eye to the massive and brutal killings of civilians by the military in the English Speaking part of Cameroon. The multiple award winning musician says Eto’o and other musicians from the South West and North West Regions are not only silent but are cowards for not speaking out on the on-going crisis which has ravished lives and properties for nearly two years.

Bona, who was responding to an allegation levied on all Cameroonian celebrities for ignoring the crisis, says he was the first artist to speak up on the injustices being carried out by the military in the Southern Cameroons. As we earlier reported, Samuel Eto’o has been called by the Minister for Secondary Education, Nalova Lyonga to visit the SW and NW Regions to encourage parents to send their children back to school (Some schools  in these regions have either been burnt down or closed due to the crisis). However, his visit has been plagued with heavy backlash on social media. While some Francophone Cameroonians are asking the football icon and UN Ambassador to avoid the visit due to security reasons, some Anglophone Cameroonians say he shouldn’t bother coming since he’s been keeping his mouth shut on the unjust killings of children and innocent civilians in that part of the country in the last two years. Others are calling him a UNICEF Ambassador for the francophones only.

On the part where Bona says “some NW and SW artists are silent” on the crisis, we just want to say [the other] some English-speaking artists have used their songs to preach against the crisis. Mr. Leo used his song, “Pray,” and  Salatiel‘s video for “Toi et Moi” was to preach against police brutality, just to name a few. Other celebs like Magasco, Ambe, Nchifor Valery, Anurin, and a few more have voiced out their pain on social media.

Dcoders, do you think celebrities are speaking out enough on this crisis? Do you believe if many could speak out louder, they would make a difference?

Drop your comments below.

Writing and producing content is my life! I mean...10 years of working experience can do that, right!? Follow me @joanngomba
Related ItemsAnglophone CrisisFeaturedRichard BonaSamuel Eto'o
← Previous Story Where is Askia? Rapper accused of drug addiction, dumped by Alpha Better Records
Next Story → Vivid: 5 things to know about Blaise B’s future protege