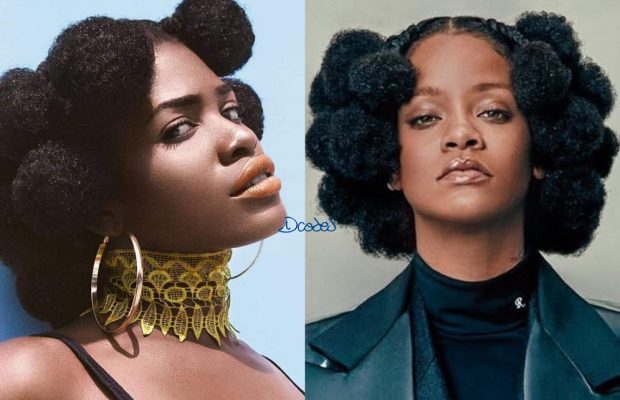 Rihanna is the cover girl for the latest issue of British Vogue Magazine and in one of her spreads in the mag, the US Pop music superstar and fashion icon is seen rocking a familiar ancient African hairstyle which has been popularized in Cameroon by singer Reniss. Fans are going gaga!

The last time an American music star famously ripped off a piece of art from a Cameroonian musician is back in 1982 when Michael Jackson joyously sang the vocal refrain, “Ma Ma Se, Ma Ma Se, Ma Ma Ko Sa,” in his hit single, ‘Wanna Be Startin Somethin,’ adapted from the late Cameroonian saxophonist and songwriter, Manu Dibango’s 1972 single, ‘Soul Makossa’.

Rihanna was also found guilty of doing the same thing in 2007 when she used the same lines in her hit song, ‘Don’t Stop The Music’ from her ‘Good Girls Gone Bad’ album. Both stars were sued by Dibango for using one of his hooks without permission and the cases were settled out of court. Fast forward to March 2020, Rihanna is again caught up in the ‘bitch stole my [look]’ syndrome by rocking Cameroonian singer, Reniss’ signature afro hairstyle in the April issue of British Vogue. But the question is: Did she really rip off Reniss’ hairdo?

Reniss was first spotted with this beautiful yet weird braids in 2016 when she released the cover art and video of her hit single, ‘La Source’. According to the singer’s friend and female music video director, Tatapong Beyala, the hairstyle was inspired by a Nigerian.

“I saw the original hairstyle from a Nigerian artist whose specialty is to recreate portraits of ancient African slavery hairstyles,” she tells us in an exclusive chat on Instagram. Reniss immediately made her way to the top of the country’s most eccentric fashion inspirations list. Over the span of five years, the New Bell Music star has continued to hypnotize her fans and hairstylists across Africa with her unconventional hairstyles and edgy fashion statements.  Many have not only copied the singer’s looks but some beauty salon owners even call the signature hairdo by her name “Reniss”.

“When it comes to creating hairstyles in Cameroon, Reniss sets the bar for others to follow,” Nash, a popular hairstylist in Buea tells us exclusively.

“I really don’t know how she comes up with her [hair] styles but she always leaves many university students asking me to recreate her hairdos on them. When they come into my shop and demand for a Reniss style, I didn’t even know what they were talking about. After seeing couple of Reniss’ pictures on their phones and watching some of her music videos, I immediately understood how much influence she has on our young women and beauty culture. It’s really a wonderful thing,” she adds.

Yes! Reniss may have picked up the concept from an ancient Afro hairstyle library but there’s no denying that the singer has and in deed popularize the style in Cameroon. People now refer to this particular hairdo as “that Reniss style” and that is the main reason why most Cameroonians could easily call out RiRi for ripping off her hairstyle in her recent British Vogue appearance. However, Falana, a Nigerian afro singer who’s been rocking a similar hairdo (but longer and thinner) for years explained to Thiiird Magazine in a 2019 interview,

“My hair has always been a canvas for exploration and creativity. I used to wear braids and that was fun for a while. Then, I came across a stunning black and white photo of a Fulani woman with intricately styled balls and puff on her hair. Although she did not have simple braids, I was inspired by the image. After some trial and error and re-imagining, this new ‘signature’ hairstyle was born. I love it because it’s fun, edgy and super low maintenance.”

It’s clear that Reniss, and Rihanna’s hair stylists for the mag, Yusef Hair and Naphi will have their own stories behind this hairstyle choice but one thing we’re certain of is that African women, brown skin girls and hair enthusiasts have now been reminded that this fun, edgy, low maintenance and historic Afro hairdo is very suitable for all beautiful, stylish and powerful black women. Writing and producing content is my life! I mean...10 years of working experience can do that, right!? Follow me @joanngomba
Related ItemsAfro HairstyleFeaturedRenissRihanna
← Previous Story Daphne dyes her hair Rihanna red to celebrate Month of Love
Next Story → 5 Easy ways to put your quarantine to good use