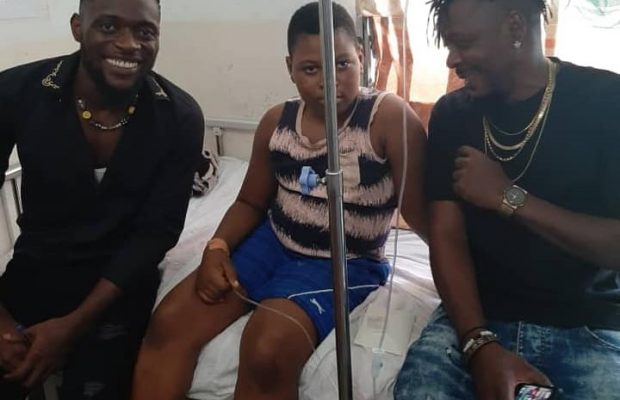 Salatiel, Big G Baba and Jules Nya are visiting some of the surviving victims of the recent Kumba Massacre which left seven children killed and nearly 11 injured at the Mother Fransisca International Bilingual School on October 24 in Kumba.

The Cameroonian musicians were seen spending quality time with some of the injured children who narrowly escape the massacre at a hospital in Kumba on November 4.

Salatiel’s special visit came after Cameroonian celebrities took to the streets for a peaceful demonstration in Yaounde on November 1.

The protest received heavy backlash from fans who questioned why francophone celebrities were championing the protest instead of Anglophones. They also slammed the artistes for not carrying the message of the killed kids at the protest ground. In now viral video, rapper Maahlox was seen sending away some protesters who carried pictures of the dead children at the protest ground.

Fans also called out some of the celebrities who were accused of participating in a photo-shoot wearing school uniforms with smiles on their faces rater than showing distress and agony towards children been killed for trying to get education.

In all of these, the host party, Salatiel has said nothing but rather, he travelled to Kumba to sympathize with the families affected by this vicious killings.