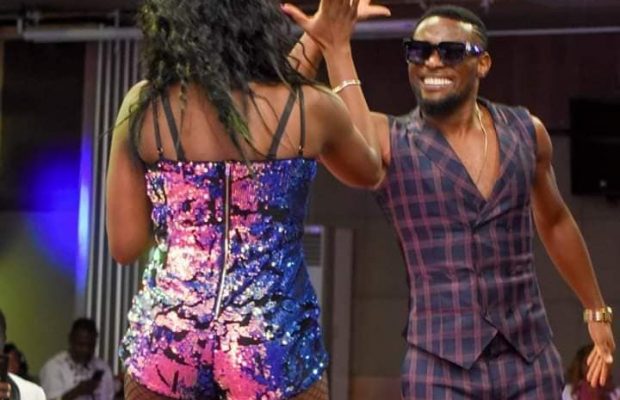 Nothing like two celebrities burying the hatchet to an two year old beef on stage.

Salatiel and Montess have reconciled their differences after both camps clashed on the media in 2017 thanks to the latter’s win as ‘Best Female Artist Central Africa’ at the 2017 AFRIMA in Lagos – Nigeria. Singer, Salatiel took to Facebook slamming Montess’ win, while calling out the award organisers for fraud  and not giving the right persons their deserved recognition. That year, Montess went head-to-head with two of her fellow Cameroonian female musicians – Daphne and Blanche Bailly – in the same category.

What made Salatiel’s social media rant more questionable was him congratulating singer Locko for winning the same AFRIMA for ‘Best Male Performance’ that same year. Fans asked; why slam Montess yet praise Locko?

In an exclusive interview with Dcoded TV in 2017, Montess revealed Salatiel’s public disapproval of her victory was hurtful and “he disappointed me“. However, the singer told us, she was ready to move on and work even harder to prove her ‘haters’ wrong. In December 2019, singer Blanche Bailly also brought up Salatiel disapprovement of Montess’s AFRIMA 2017 win on social media. In a post on Facebook, the ‘Bon Bon’ singer reminded Salatiel of discrediting Montess’ victory after the record label owner advised her to not be focused on what people think about her but to keep moving on with her life, choices and music. But it seems Bailly misunderstood his post and quickly fired back. Fast forward to 2019, Montess has not only worked with two members of Salatiel’s Alpha Better Records on her song ‘Passe Pas Tous’ featuring Mr Leo and produced by Akwandor, she and Salatiel did perform together on one stage at the Bonteh Digital Media Awards (BDMA) 2019 in Douala on December 17.

During her performance, the ‘DJ Play My Song’ singer requested for Salatiel to join her on stage , to which he agreed and both gave the audience a sensational dance together. Is all good in paradise again for these two? Or was that just a publicity stunt?

Stay with us for more on this story.