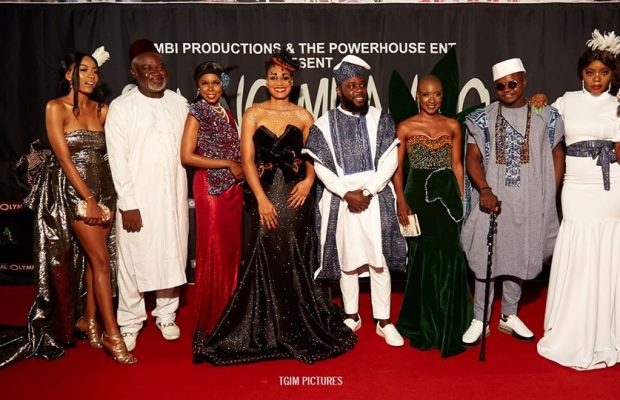 A team which slays together, wins together!

The cast of the movie ‘Saving Mbango’ has been on a wild fashion ride since the movie kicked off its nationwide media tour back in October.

From October to December 2019, the cast of the now very famous Cameroonian film hasn’t just showed togetherness on every red carpet but they’ve also slayed together, an act which has impressed almost every fashion blogger in the country. Stephanie Tum, producer of the film led the clutch – killing every look she stepped out with. Whether they were radio, TV interviews or city screenings, the actress made sure she sold her movie by just looking elegant, neat and presentable.

Lead acts, Laura Onyama and Gordis Fungwa were the eye candies. Everyone wanted to see their every look and boy did they not disappoint! Rocking strictly Cameroonian fashion designers, ‘Mbango’ and ‘John’ nailed each appearance and left no room for errors.

“When you look good, you feel good and then, make everyone you meet feel even better. That’s the vibe we all carry as we move from one place to another promoting this movie. It’s an amazing film which tells our own story in our own way… so looking great is only part of the process to attract many more people to be attracted to the film as well,” Malvis Ann Mohvu, actress tells us. Collectively, the cast was one to watch out for at every red carpet. They show up and, own the place! They blended very well with their style just as they did with their relationship on set. They appeared friendly, approachable, talented and ready to run the world.

Even though each cast represented a diverse style, one could hardly notice the big difference when all stood together for pictures. #TeamSavingMbango literally saved the red carpet vibe in Cameroon in 2019!