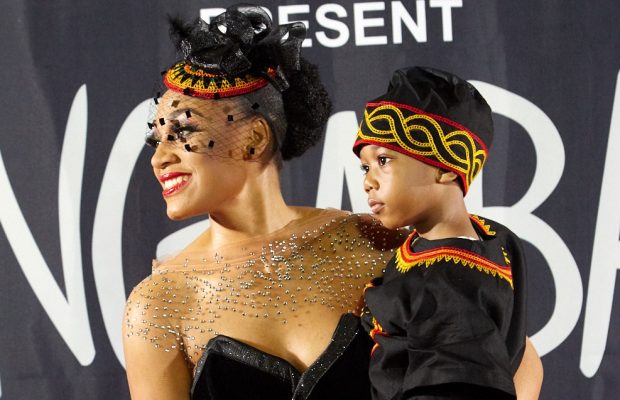 It was a family affair for first time movie producer, Stephanie Tum at the premiere of her debut movie, ‘Saving Mbango’ in Douala on October 26.

Even though their dad was a no show at the event, both sons posed as their mama’s perfect dates for the night. Mutta, 13 and Dudu, 4 looked completely amazing as they matched their mother’s toghu design on the red carpet. They paired their black, shoes and pants with traditionally embroidered tops and similar hats. Stephanie didn’t just get the support from her sons on the red carpet, she also received praises from her oldest boy while seated in the hall. “I want to thank my mom for going through with this project. I was not easy for her but I am so happy that she did it… I love you mom,” Mutta told the crowd.

The actress wasn’t the only celebrity who enjoyed some great family time at the premiere. Lead actor, Godisz Fungwa brought his mother as his date for the night and had nothing but pride for her. The actor took to his Facebook to say so himself.

“My mum came through for me..She now calls me JOHN….. LOL
I LOVE THIS WOMAN RIGHT HERE.. #SAVINGMBANGO  #KINGOFTHECRAFT. “