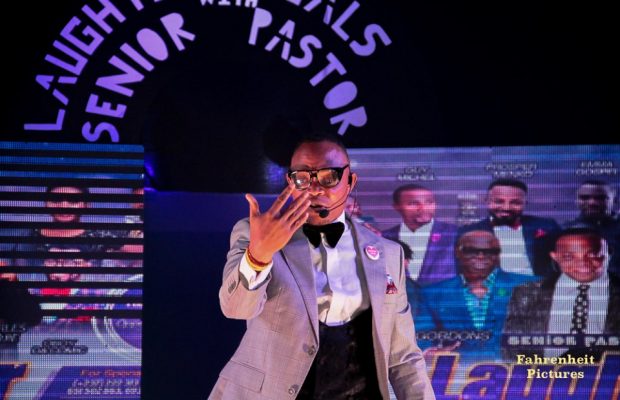 The Red Cross Hall in Yaounde beamed with an enthusiastic crowd as nearly 20 of Cameroon’s finest stand-up comedians combined with the nation’s biggest gospel musicians to thrill Yaounde residents. Their standout performances has just showed why ‘Laughter Heals’ is described as the biggest comedy show in Cameroon for 2019. Anchored by popular media personality, Steve Christian Fonkam, the ‘Laughter Heals Comedy Show,’ will for years remain indelible in the minds of Cameroonians as many of those who attended said the capital city had never witnessed a show of that magnitude, mostly because the people of Yaounde are widely known for not attending events especially on a Sunday night.

Music stars, Prosper Menko and Emma Gospel set the 1500 capacity hall on fire with their electric performances which practically drove the crowd into a frenzy… leaving everyone on feeling ike they just received the Holy Ghost.

The top Nigerian comedians on parade; Gordons and ‘The Johnsons’ TV Series star, Charles Inojie were unavoidably absent but the Cameroonian stand up comedians brought their A-game on stage. By the end of the event, no one even remembered if the Nigerians were necessary. Oboy Da Comic, Spako, Badly Brought Up, MP3 and many others made efforts to diffuse tension from the security challenges in the country with expressive jokes.

The comedians literally sent the audience into guffaws with their rib-cracking jokes. Oboy said Cameroon has lost value in their own so much so that Chinese people now have more use of the CFA coins than Cameroonians. He even added that the Chinese have also invaded the country to the point where they are now selling puff puff and beans as well as fried potato and eggs on the streets.

The duo of Spako and General Toxic also sent the huge crowd reeling with laughter. Spako spent time highlighting his funny childhood days as a Kumba ‘pikin’ before been joined by Toxic for an energetic musical performance. His very long red check jacket and 3/4 size pants and colorful socks were the clinchers! The revelation for the night was Massa Kalaba, a francophone comedian who had no problems cracking jokes in the English language. The comedian, who stepped on stage as a Zulu Prince thrilled the crowd with jokes on  the use of bilingualism in Cameroonian music and it was his joke on anyone not mentioning “Paul Biya” at the commercial avenue for fear of a bullet that got everyone laughing so loud and hard.

Explaining the basis for the show, the anchorman, Steve Fonkam said, ‘Laughter Heals is that comedy show that brings together the best in comedy to make Cameroonians laugh despite the tense socio-economic nature of the state.”

David, a student of Geography, University of Yaounde 1, who attended his second comedy show, said it was the biggest and the richest he had ever attended.

“This show is the biggest and the most entertaining show I have ever watched in my life. You know, I wasn’t too sure when I bought a ticket to come. So my coming was basically to see what will happen and I thank God that I did not miss the show. Otherwise, I would have missed the opportunity of being part of this great fun,” he told us.

Similarly, Pascal, a wood dealer, said, “kudos must be given to Senior Pastor and his entire team for this fantastic show. I really enjoyed myself”. ‘Laughter Heals’ comedy show has definitely set the pace for the next comedy shows to come. It was big, it was loud and it was funny!

Writing and producing content is my life! I mean...10 years of working experience can do that, right!? Follow me @joanngomba
Related ItemsCameroonFeaturedLaughter Heals Comedy ShowSenior Pastor
← Previous Story Beta Girls Talk Event: A Beauty, Love and Sex chat forum for young women
Next Story → Miss Africa 2019: Who will represent Cameroon?