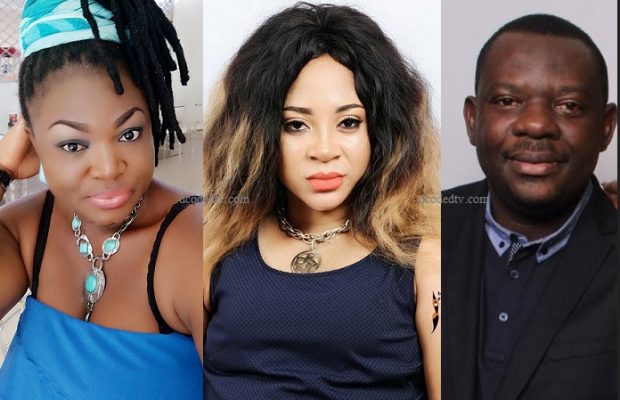 Juice or no Juice!?

Actress, Solange Ojong is reportedly in the middle of a nasty legal drama between her alleged boyfriend and Bamenda businessman, Edison Fru Ndi and his former employee, Jessie Nehwah.

Our inside source tells us Mr. Edision, CEO of Dreamland Restaurant and Dreamland The Chase in Bamenda, is dragging his former staff, Jessie Nehwah to court on February 2 over an alleged story which surfaced online back in December claiming he was having a sizzling romantic affair with actress and mother of four, Solange Ojong. According to Kinnaka.com, Solange Ojong was introduced to Edison by her close friend and colleague in the film industry, who was also working for Mr. Fru Ndi at the time (but kept her anonymous). The couple was seen together on multiple occasions within Bamenda like the man was not even married (Edision is married to a certain Pamela and they have kids together). However, Solange later blackmailed her friend to her rich boyfriend, which ended her friend’s job at Edision’s company.

Kinnaka also reported that the actress got pregnant for Mr. Edison but later suffered a miscarriage… even though she alleges that that’s one of Solange’s strategies to rip off money from her love victims, noting that Solange has four kids with four different men(?). Fast forward to January 2018, Mr. Edison claims the “close friend” who sent out that information to Kinnaka.com is a former staff of his and Solange’s one time close friend, Jessie Nehwah. He has since sacked her from his restaurant and served her with a convocation for defamation.

Today, Jessie claims, she is not the person who sourced Kinnaka’s blog with the information of Solange and Mr. Edison’s alleged affair.

According to our source, Jessie was recently thrown behind bars and spent three nights at the Judiciary Police station in Bamenda over charges of taking an illegal picture of Edison and Solange; Circulating false news of Edison and Solange on social media; Writing defamatory stories about the said couple; Alleging Edison and Solange are having a secret affair  and claiming Solange Ojong is pregnant for Edison. Our insider confirms that Jessie in deed took that famous picture of Edison and Solange which ended up on Kinnaka’s Blog but DID NOT send it to the blogger. Instead, she handed the picture to Solange Ojong since it was with Solange’s phone the picture was been taken.

“I didn’t even know Bandi Kiki, (Boss of kinnaka’s blog) until after I was accused of spreading the rumors of Edison and Solange love affair,” claims Jessie.  So if she didn’t send Kiki the pic, who did? Solange Ojong herself?

Jessie is now alleging that Mr. Edison is threatening her life and she no longer feels safe in Bamenda. Plus, she claims Edison owes her pending salary because since she began working as a supervisor at his company, he has never paid her a dime… which wasn’t part of their deal.

The case between Mr. Edison and his former staff, Jessie Nehwah goes to court on February 2.

We’ll keep you all posted.

Writing and producing content is my life! I mean...10 years of working experience can do that, right!? Follow me @joanngomba
Related ItemsDreamland RestaurantDreamland The ChaseEdison Fru NdiFeaturedJessie NehwahSolange Ojong
← Previous Story Daphne, Montess: Which singer has the best bikini body?
Next Story → Cameroonian media personality, Joan Ngomba marks a decade in media with stunning new photos