White hot! Syndy Emade flaunts her cleavage and toned legs in sexy semi-sheer dress for “A Man For The Weekend” movie premiere 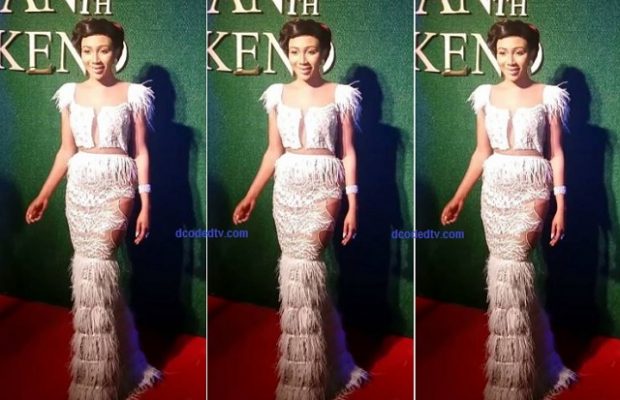 Syndy Emade ensured she made quite an entrance on the red carpet at the premiere of her latest movie, “A Man For The Weekend” by wearing head-to-toe EB Kreations!

The famous Cameroonian actress and producer proved she was a force to reckoned with on the style front as she stepped out for the premiere of her latest film, “A Man For The Weekend” at the Canal Olympia Cinema in Douala, October 28 in a mouth dropping white number.

Syndy Emade looked incredible in a white cut-out dress by EB Kreations – which flaunted her cleavage and snippets of her toned legs with its semi-sheer material.

The gorgeous one-piece infused elements of innocence and sex appeal as it lined the contours of her sensational physique.

It plunged perilously down the middle before a snippet of semi-sheer detailing flashed a slither of her toned abs and firm hips. Syndy‘s garment also went on to flash her enviable legs with its lace fabric and fell stylishly to the floor.

The sexy screen queen further boosted her height with a pair of strappy white heels.

ALSO READ: Is Syndy Emade Under Pressure To Get Married?

Emade has had a busy year so far promoting several projects including last month’s film “A Man For The Weekend” and beauty product, Soleza – which she is a brand ambassador to.

In the movie, Syndy plays Candice Ayuk, a young and successful business entrepreneur who found it hard to fall in love and was forced to borrow a man for the weekend just to please her “annoying” mother.

Writing and producing content is my life! I mean...10 years of working experience can do that, right!? Follow me @joanngomba
Related ItemsA Man For The Weekend MovieEB KreationsSyndy Emade
← Previous Story Nigerian designer, Femi Toys redefines suit wear for every man
Next Story → Ladies’ Night: Every Woman Looked Like Clean Money At A Man For The Weekend Premiere