Home / Lifestyle / Fashion / Who Wore It Better: 5 Cameroonian celebrities in the same outfits

Who Wore It Better: 5 Cameroonian celebrities in the same outfits 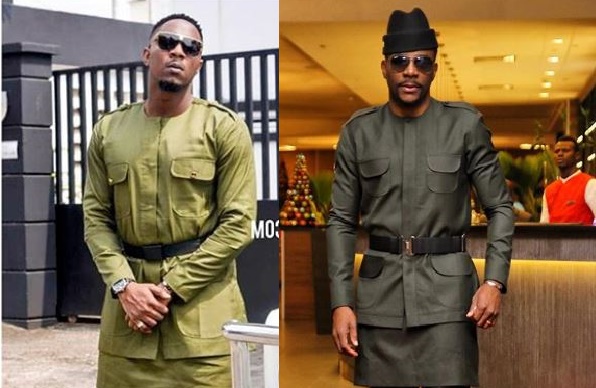 We’re taking note of the many times some Cameroonian celebrities wore the same look as others, and how they made it their own.

Even the best of them stars do have twinning moments and its not a bad thing! The fashion industry does experience times when two stars rock identical outfits at public appearances and fans go gaga with who wore it better? As much as we want to ask why designers would create the same designs for different people, we are here for the buzz of it all.

Take a look at stars wearing the same outfit and pick your favorite look in the fashion face-off below.

ALSO READ: All Our Fav Looks From The Golden Globes 2019

Men in floral shirts is in and every guy wants a piece in his closet… or wardrobe.  Cameroonian singers, Tzy Panchak and Nick Piccasso get the memo and they got our attention while rocking their beautiful floral shirts at different occasions. While, El Chako donned an ice blue-ish floral shirt from Eloli World, Piccasso went for a golden colored shirt and paired his look with heavy gold chains, dark shades and a wine-colored cap. Both rocked it. So, it was a fair game.

When you want to channel an African man’s style, you better go for Ebuka Obi-Uchendu‘s! Cameroonian Hip Hop super star, Stanley Enow knows it too and he made an attempt. The rapper’s designer and stylist, Clifford Ngeh (for Whizz Kliff Designs) donned the rapper in an army green outfit for his C’est video but his look reminded us of Ebuka’s Mai Atafo SS19 Urban Jungle Collection look at the Sound City MVP Awards in January. Fans sincerely think Stanley look good but can’t stand the chance with a solid Ebuka style.

The dry season comes along with some pop of color!  Top Cameroonian models, Audrey and Adama were spotted in sexy multi-colored swimsuits at Seme Beach, Limbe this February. The Niki Heat models cared less about the critics when showing off their banging bodies in similar Jamaican flag inspired bikinis from Aurama‘s debut swimsuit collection.  Talk about swimsuits being the reason behind your happiness and sexiness. Both stunned and we love it!

Bamenda based fashion designer, ShaSha released her last collection in November 2018 before using it to launch an #AgbadaChallenge in Cameroon. Among the very daring and colorful collection was a design with a long top featuring a large middle split which exposed the belly button. She placed it above a sequins high waist skirt and underneath a native hat. Well, back in August 2018, Nigerian designer, Sisiano released a summer vibes collection to celebrate the African woman with the same design that Sha Sha used and it was seen on Nollywood actress, Beverly Naya that same month. Well, although it clear Sha Sha ripped the creative, we still love that she made it with her own color and brought it to Cameroon.

It’s rare to find a male and female rocking identical looks except when they are on some #agbadachallenge in Africa. Cameroonian fashion designer, Juliette Sparks put actress, Malvis-Ann Mohvu and rapper, Roqzen Fanila in the same look and it was a bang! “Ankara is the new black”, she claimed when she used both celebs to showcase her unique mustard color Ankara pants and navy blue floral top. Both really looked good and this look is perfect for you who loves to dare.

ALSO READ:  Check Out Every Outfit Magasco Wore To The Golden Show

Which celeb looks did you like the most? Once again, even the most stylish celebrities have their best fashion twinning moments. Don’t forget to drop a comment below.