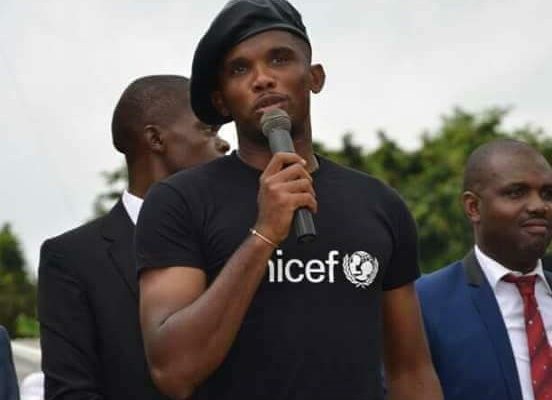 Samuel Eto’o’s UNICEF Ambassadorship called to question by an angry fan on Facebook!

Samuel Eto’o Fils has been attacked by an angry fan who claims the African football icon  and UNICEF Ambassador has remained silent despite the brutal killing of numerous civilians peacefully protesting in the Anglophone Regions of Cameroon by the arm force.

The fan made her voice heard after Samuel Eto’o‘s video showing him inspecting a football stadium in Douala went viral online on October 9. “A Leader on the field.

Samuel Eto’o, top scorer in the history of the Indomitable Lions of Cameroon, chose to come to the field, supervise the work of the stadium and wet his jersey with these brave Cameroonians who work day and night on the site to offer a beautiful mass of football to Africa as a whole in 2019.

Here’s #SEF on the field, we can sleep quietly.” “When you play football even Anglophones support you. But as an ambassador to UNICEF, it is a shame that with all the killings going on in Southern Cameroon, you have kept quiet. #silencetoinjustice makes you an accomplice. Shame on you Samuel.”

Whoever controls the Facebook page carrying the post replied the fan, “No insults on this page.” Meanwhile other Eto’o fans replied saying Titti should keep Eto’o out of the Anglophone Struggle as he’s only a footballer not a politician. “Keep Samuel Eto’o away from your fucking bullshit,” Larry Bradley wrote. But Titti Manor fired back:

“Eto’o has the power to make a change. He should use it in times like this. Do you know what it means to be given the title of a UNICEF Ambassador? We don’t need to solicit a real ambassador to speak. It is his duty. The number of people killed are rising daily. Corpses are being found. The wounded are being carried away so they don’t get any treatment. That my friend is wrong and me and you need to speak up and put an end to the massacre.  Is he an ambassador only to certain Cameroonians? Thanks!” Despite other fans coming to Eto’o‘s defense, Titti remained resilient posting graphic images of dead bodies on the streets from the now infamous October 1 shootings as her response.

Dcoders, do you think Titti Manor is right to call out Samuel Eto’o –  a UNICEF Ambassador – for staying quiet ober the Anglophone crisis?

Writing and producing content is my life! I mean...10 years of working experience can do that, right!? Follow me @joanngomba
Related ItemsAnglophone StruggleFeaturedSamuel Eto'oUNICEF
← Previous Story Locko begs for dialogue to end the Anglophone Struggle
Next Story → Tzy Panchak slams Blaise B “Stop disgracing us locally”