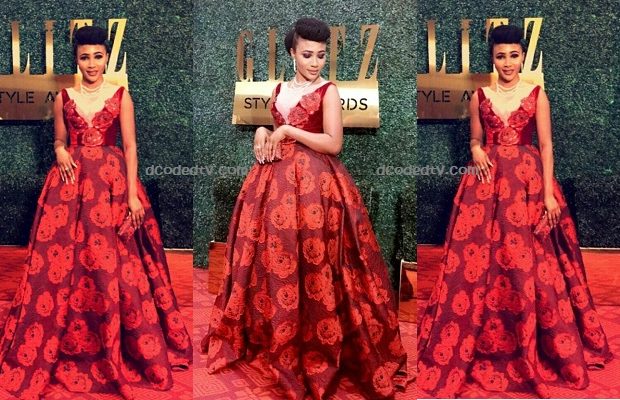 Syndy Emade made a style statement at this year’s Glitz Style Awards in Ghana, stepping out in a beautiful red velvet and brocade gown embellished with crystals from Swarovski by Ghanaian designer, Ophelia Crossland Design. The Cameroonian actress and film producer is no doubt a style icon and when it came to choosing a dress for one of Africa’s biggest style award shows – Glitz Style Awards – Syndy Emade didn’t rely on her past red carpet glories!

The Glitz Style Awards 2017 red carpet was blessed with the best of African fashion and style icons but when your dress was as good as Syndy’s, where do you even begin? This is definitely a change from Syndy’s usual style which tends to be a lot more sleek and sexy, but we are loving this bold, voluminous and confident look on her. That said, the matching embellished clutch, along with her cool natural hair style and visible smile, did add an edgy vibe into the mix.

ALSO READ: Syndy Emade vs Malvis Ann Mohvu: Which actress is breaking the internet with this platinum pixie cut? The 2017 Glitz Style Awards was great—especially for the winners—but the red carpet? That’s where all the stars got a chance to shine! And speaking about stars shining, Syndy made sure to walk hand-in-hand with her c0-presenter, actor, John Dumelo. Both were seen posing for the eager photographers on the red carpet.

And Syndy made sure to secure the winning look! We love Syndy just the way she is, but are you happy that she went with a different look in Ghana?